By Mario Toneguzzi on May 2, 2019No Comments

Suncor said it distributed $662 million in dividends to shareholders

Calgary-based Suncor Energy is reporting net earnings of $1.47 billion, or 93 cents per common share, in the first quarter of this year.

That compares to net earnings of $789 million, or 48 cents per common share, in the prior year quarter. 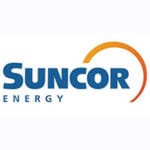 “Total oil sands production was 657,200 barrels per day (bbls/d), compared to 571,700 bbls/d in the prior year quarter. Increased production from the ramp up at Fort Hills and improved Syncrude asset utilization of 90 per cent more than offset the impact of mandatory production curtailments implemented by the government of Alberta,” it said.

Suncor said it distributed $662 million in dividends to shareholders and repurchased $514 million of common shares in the first quarter of 2019.

It said its total upstream production was 764,300 barrels of oil equivalent per day (boe/d) during the first quarter of 2019, compared to 689,400 boe/d in the prior year quarter, with the increase primarily due to the ramp up of Fort Hills production, improved asset reliability at Syncrude and the Hebron ramp up. This was partially offset by the impact of mandatory production curtailments in the province of Alberta, which took effect at the beginning of the year, it added.